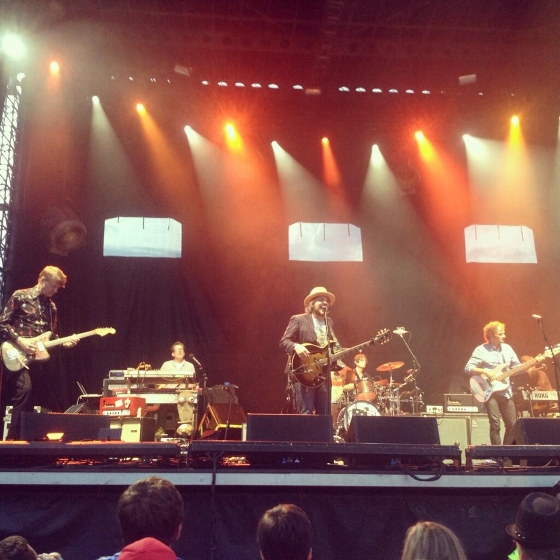 Tonight Grateful Dead / Furthur guitarist Bob Weir ended his four-show stint on the AmericanaramA traveling festival. Weir joined tour headliners My Morning Jacket, Wilco and Bob Dylan at The Lawn at Riverfront Park in Nashville, TN and once again the big story was Weir’s sit ins with Wilco and MMJ. The Bobby/Wilco collaborations started at the AmericanaramA tour opener in West Palm Beach, which was highlighted by a Weir sit-in with Wilco, and was followed by Thursday night’s visit to Tampa where Bobby sat in with both MMJ and Wilco. Last night “Ace” guested with MMJ on “I Know You Rider” and Wilco on “Dark Star” > “California Stars” > “Dark Star” in Atlanta. Tonight, My Morning Jacket welcomed Weir for “I Know You Rider” and “Brown-Eyed Women” before Wilco brought him out for “Bird Song” and “Tomorrow Never Knows.”

My Morning Jacket was up next and treated attendees to a batch of Circuital tracks including the title track from the 2011 album, “Wonderful (The Way I Feel)” and “First Light.” Jim James and Co. also played the tour’s first version of “Master Plan” and delivered “War Begun” off their 1999 debut – The Tennessee Fire. Bobby emerged towards the end of MMJ’s set to guest on Grateful Dead live staples “I Know You Rider” and “Brown-Eyed Women.” While the Louisville-based band played “Rider” with Weir last night, tonight marked the MMJ debut of “Brown-Eyed Women.”

Meanwhile, Wilco continued a trend of opening with songs featuring lyrics penned by Woody Guthrie from the Mermaid Avenue series of albums. Tonight, Jeff Tweedy and Co. kicked off their set with “Blood Of The Lamb.” The Chicago-based band also performed classics like “Side With The Seeds,” “Jesus, Etc.” and “Misunderstood” before bringing out Weir. Bobby sat it on the Wilco debut of “Bird Song,” a Grateful Dead song written by Hunter and Garcia. He stuck around for a cover of “Tomorrow Never Knows” by The Beatles another Wilco debut. Both “Impossible Germany” and “Hoodoo Voodoo” were among the songs that Wilco closed out their set with following Weir’s departure.

Bob Dylan continues to perform a very similar set at each AmericanaramA tour stop and has yet to collaborate with anyone else on the tour.