Rush has always been proud of their Canadian heritage, so it must’ve been a thrill for the band when they shared the stage with hockey’s biggest prize – The Stanley Cup – last night at First Midwest Bank Amphitheatre in Tinley Park, IL. The Chicago Blackhawks won the cup on Monday night by defeating the Boston Bruins in Game 6 of the NHL Finals and the trophy’s appearance marked the end of a long day in which the ‘Hawks’ victory was celebrated with a parade in Chicago.

Always the jokester, professed hockey fan Geddy Lee introduced “Lord Stanley and his cup” as a small road case was wheeled on to stage towards the end of Rush’s main set. Two roadies opened the case to reveal a miniature Stanley Cup leading the crowd to wonder if they were being punked before Chicago Blackhawks winger Daniel Carcillo brought out the real Stanley Cup to massive applause.

Carcillo hoisted the cup proudly and brought the trophy around to each member of the band, with Neil Peart using his opportunity to drum on the bottom of the cup. The crowd went wild as the Stanley Cup was repeatedly hoisted. Once Carcillo and the trophy left the stage, Rush finished their set with “YYZ” and “The Spirit Of Radio.” 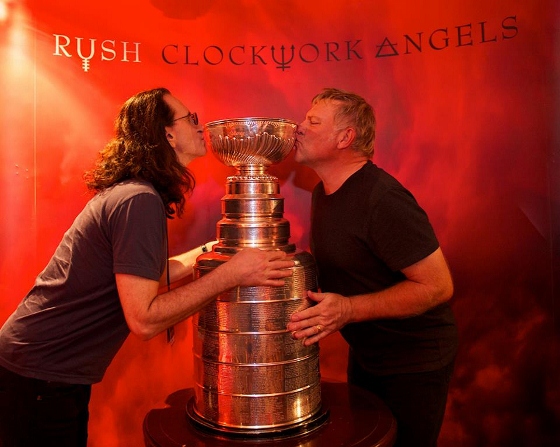 Here’s the setlist from Rush’s visit to Tinley Park…