The musical adventure known as Jam Cruise will depart on its 12th voyage this January. For its first year, 2004, the boat made two trips one right after another early in January aboard much smaller vessels than the one currently used. The lineups featured such perennial jam favorites as Les Claypool, Keller Williams, Karl Denson’s Tiny Universe and Galactic. 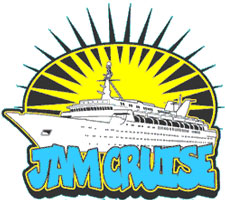 Today, in honor of Jefferson Waful posting perhaps the quintessential look at the Jam Cruise experience we wanted to look back at the cruise’s first two journeys. Watch a five-minute montage featuring footage from Jam Cruise 1 and 2:

Jam Cruise’s inaugural voyage is set to happen January 6th through 10th, 2004. The chartered cruise ship, loaded with ten bands and 800 music fans, will port from Ft. Lauderdale, Florida and head south to rock the high seas for four days and four nights. The event will mark the first-ever jamband music festival at sea.

Jam Cruise will offer all your typical sea-vacation attractions: all-you-can-eat fine dining, casinos and other fun activities, spa facilities and pampering service, and opportunities to explore new places (this cruise will dock at some of the most beautiful beaches in the Bahamas and Key West).

But Jam Cruise ditches the typical background boat entertainment, opting instead to make music the focus. Jam Cruise 2004 has confirmed some of today’s favorite modern pioneers of improvisational music to perform on three different stages: an outdoor stage on the boat’s top deck, an indoor theater, and an intimate nightclub. Jam Cruise passengers can choose to enjoy any or all of more than 22 concerts, plus all-night jam sessions between the stars on board. The show admission is included in the cabin price. Musical acts confirmed thus far include: Galactic, Keller Williams, Dirty Dozen Brass Band, Peter Rowan’s Reggaeabilly, Billy Nershi (of The String Cheese Incident) and Liza, Karl Denson’s Tiny Universe, Jerry Joseph, The Disco Biscuits, MOFRO, Particle, Umphrey’s McGee, Supreme Beings of Leisure (DJ set), and DJ Z-Trip. Additional acts will be announced soon.

Jam Cruise is a modern offspring of a long tradition of camping music festivals, a tradition that began during the ‘60s with bands like the Grateful Dead and events like Woodstock. The concept was to spend time with friends and build community through music. Over the past decade, this underground movement has enjoyed a revival, amassing a broad variety of musical talent and a loyal following of adventurous music lovers. Such qualities have allowed the scene’s bands and promoters to be increasingly innovative in the events that they organize.

“Jam Cruise is a concept that we have been nurturing for quite some time, and we couldn’t be more excited to finally execute our ideas,” says promoter Josh Moore of Athens-based Jomo Entertainment, who is organizing the event with partner Mark Brown of Brown Coffee Productions in Delray Beach, Florida. To make sure that the inaugural Jam Cruise is a premium experience for everyone involved, Moore and Brown have also brought Roger Naber to consult. Naber is the producer and mastermind behind the highly successful Legendary Blues Cruises, a similarly music oriented cruise catered to a different clientele. “In many ways, the jamband scene has mastered the art of organizing a festival,” Moore continues. “So what’s next? The bands and fans are waiting to be even more inspired than their last adventure. They want the ultimate musical experience in a magical location. That’s what Jam Cruise offers.”

Music-travel experts Madison House Travel will be coordinating cruise accommodations for the event, as well as any flight and lodging needs passengers might have. Madison House Travel, owned in part by the popular improvisational band The String Cheese Incident, was started four years ago in anticipation of precisely this kind of music-travel trend.