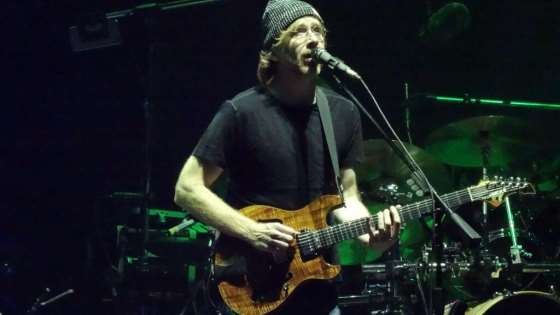 Phish finished off an outstanding 12-show fall tour last night at Boardwalk Hall in Atlantic City, NJ. Following Thursday’s shocking “album from the future” performances of Wingsuit and Friday’s relentless, all-around scorcher, last night the Vermonters delivered another jam and original-heavy show that ended with one arena rocker after another.

The first set saw Phish reel off a slew of tour staples, with the biggest treat taking place towards the end of “Theme From The Bottom.” Instead of bringing the song to a close, keyboardist Page McConnell hopped on clavinet and led his mates into a funk groove. When guitarist Trey Anastasio approached the mic it was clear we were getting a reprise of the Theme from Shaft jam that took place the previous evening. Not only did the quartet ride the groove, Anastasio also goaded Jon Fishman into making a rare political statement (though jokingly) when Trey asked the drummer about his least favorite and second-least favorite presidents. Fish, in reference to the “bush” shenanigans that took place during the prior night’s “Makisupa” responded “Bush” to each question as he did to Trey’s query about his favorite brand of beer. The band brought “Theme” to a close after the fun “Shaft” excursion.

The second set started off with highly exploratory versions of both “Down With Disease” and Piper.” While the “Disease” wasn’t quite to the heights of the glorious Reading take, it sported a powerful climax. “Piper” gave the fans another chance to shout the “woo!s” that started back in Tahoe as the band egged the audience on with a number of stops and starts leaving room for the crowd participation. A poignant and impeccably placed “Roggae” followed before “Waves” saw a return to the jamming, complete with a full-on transition into an unorthodox “Tweezer.” This “Tweez” was similar to 1997 versions in that the band slowly and methodically worked a deep groove, rather than relying on a build. Phish gave fans a chance to dance during the funky “Tweezer” that was actually concluded. From there, the quartet unleashed three arena rockers with big guitar solo finishes in “Julius,” “Backwards Down The Number Line” and “Character Zero” to bring the last set of the tour to a close. “Sleeping Monkey,” with its references to the shore, and “Tweezer Reprise” served as encores.