The rumors are true, the “core four” of the Grateful Dead -Bill Kreutzmann, Phil Lesh, Bob Weir and Mickey Hart -will reunite for a series of three shows at the gigantic Soldier Field in Chicago over the Fourth Of July Weekend as per Billboard. One-time member Bruce Hornsby, Furthur/RatDog keyboardist Jeff Chimenti and Phish guitarist Trey Anastasio are all aboard for the performances, which celebrate the 50th anniversary of The Dead. The three shows in Chicago, scheduled for July 3 -5, are billed as the final performances from the core four. “These will be the last shows from the four of us together,” Weir told Billboard. The shows are being produced by Madison House Presents and Peter Shapiro (Relix, Brooklyn Bowl). 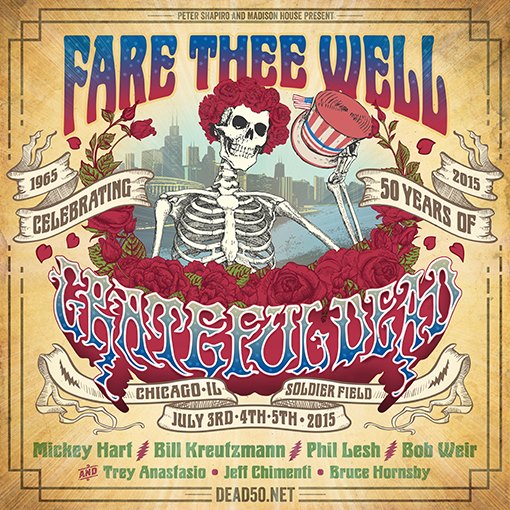 You might recall that Soldier Field hosted the final Grateful Dead show in 1995, just a month before Garcia’s passing. We should also note, these are the first confirmed performances for Weir following the abrupt cancelation of all scheduled tour dates back in August. Here’s the ticketing details via Dead50.com:

Grateful Dead Ticketing mail order begins January 20th click here for more details. Dead pre sale begins Feb 12th @ 10 a.m. CST via Dead Online Ticketing. Pre-registration is encouraged, but not required. Before checking out, all users must create an account after tickets are added and before completing the transaction. Public on sale is Feb 14th @ 10 a.m. CST via Ticketmaster.

Watch Trixie Garcia announce the shows, which are billed as Fare Thee Well:

Anastasio is an inspired choice to perform with the band as the leader of an act that inherited the jam throne after Jerry Garcia’s passing in 1995. Trey first saw the Grateful Dead in Hartford back in 1983 and had a life-changing experience that he likened to “getting hit in the head by a baseball bat.” Here’s Trey’s take on the evening:

Phish covered a number of Dead tunes over the first few years of their career, which started shortly after Trey’s Grateful Dead experience. As the Vermonters’ star began to rise, Phish wanted to avoid the Dead comparisons the media loved to wax poetic about and stopped covering Jerry et. al’s songs. Once Phish became a huge act, they stopped worrying about the comparisons and on the 3rd anniversary of Garcia’s death covered “Terrapin Station” in Virginia Beach. The next April, GD bassist Phil Lesh invited Anastasio and Page McConnell to perform as part of the first Phil & Friends shows following Lesh’s liver transplant -a series of three incredible shows. Trey sat in sporadically with Phil & Friends over the years, while Lesh, Kreutzmann and Weir have each guested with Phish over the years. “I got a really heart-warming letter from Phil saying that he and the other three guys had talked about it and hoped I would do it,” Anastasio told Billboard. “I didn’t hesitate for a second to say yes. It’s an absolute honor to be part of this final chapter.”

“Jerry Garcia was a great American master and the Grateful Dead are not just a genuine piece of musical history, but also an important part of American history,” said Trey Anastasio in a press release. “”This is a band, born right at the beginning of electric rock, that took the American tradition and moved it forward. They really embodied the American concept of freedom, rolling around the country with a ginormous gang of people and the mindset that ‘you can come if you want, you can leave if you want. We don’t know what’s going to happen. All we know is we’re not looking back.’ What could be more American?””

Our favorite Trey performance of The Dead’s music came in 2006, when he unleashed one of his greatest guitar solos during a performance of “St. Stephen” in Camden:

Bruce Hornsby answered the call when the Grateful Dead needed to fill the keyboard seat following Brent Mydland’s tragic death in 1990. While Hornsby wasn’t willing to give up his solo career to join the band, he did tour with them -and keyboardist Vince Welnick -for a few years as Vince got his feet under him. Bruce performed with members of the Dead at various points in the years following Garcia’s death, but hasn’t been a part of any of the various post-Jerry incarnations of the band in the ’00s.

Our favorite Hornsby with The Dead performance took place at the start of a June 17, 1991 show at Giants Stadium in East Rutherford, New Jersey, when Bruce prodded the band into opening with “Eyes Of The World”:

Jeff Chimenti was a member of Lesh & Weir’s Furthur outfit since its beginning in 2009. Chimenti had been a member of Weir’s RatDog ensemble since 1997 and has played as a member of Phil Lesh & Friends a number of times recently. The keyboardist also played with the core four as part of The Dead and The Other Ones in the ’00s.

Soldier Field opened in 1924 and has been the longtime home of the NFL’s Chicago Bears. The stadium boasts a capacity of 61,500 and underwent a major renovation in 2003. Garcia played his final shows ever at Soldier Field on July 8 & 9, 1995.

We’ll have much more on these shows in the months to come.